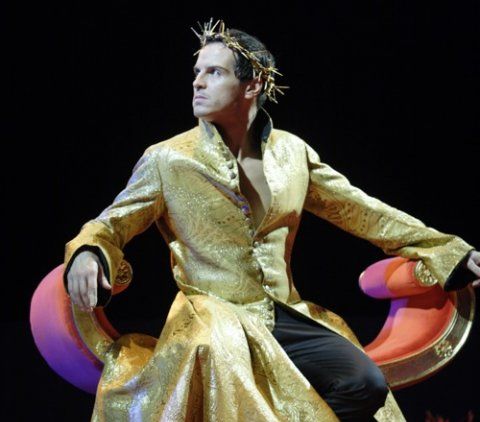 The English premiere of what Ibsen considered to be his greatest triumph is not an easy piece to digest. This, his longest play which, like Peer Gynt, was written to be read rather than staged, indeed requires from its audience a theatrical endurance of epic proportions. Emperor and Galilean, like a marathon, feels worthy upon completion. Originally intended to be nine hours, Ben Power judiciously trimmed this gargantuan piece of two parts of five acts down to four acts which together come in just under four hours with a cast of 50.

It is astounding that this ambitious work of Ibsen’s, despite being penned in 1873, has never been performed in the United Kingdom considering his relative success on the capital’s west-end boards, with A Doll’s House, Peer Gynt, and Ghosts being particular favorites. The last Ibsen production I saw in London was Ralph Fiennes starring in Brand at the Royal Haymarket in 2003.

The tale the fourth-century AD Roman emperor Julian the Apostate (Andrew Scott), the last of the pagan emperor’s epic rise and tumultuous downfall, is the principle focus of the play. Laid before us is one man’s tortuous search for a philosophical truth and religious identity. Julian, through his tutor Maximus (Ian McDiarmid), questions free will and destiny, politics and religion, the body and spirit. The juxtaposition of human conceits and folly to that of our great endeavors and aspirations in this one work is scintillating. In true Ibsen form, the text provides a wealth of literature, biblical, and historical references that stay with the viewer long after the curtain goes down.

Andrew Scott is truly beginning to make a name for himself. He was recently seen briefly in the BBC’s Sherlock and at the Old Vic in Noel Coward’s Design for Living. Each time I see him onstage, I am ever more convinced of his talent  and impeccable timing. He somehow succinctly conveys the warring need for power and intellectual stimulation in this rather weak minded man. His performance was inspiring. O’Reilly’s character, similar to her performance earlier this year at The Comedy Theatre’s Birdsong, lacked substance. McDiarmid played the manipulative advisor Maximus frighteningly well.

It is due to the great capacities and capabilities that the National’s Olivier provides that this piece truly comes to dazzling light in this theatrical cathedral. Jonathan Kent’s staging effectively segments this monolith of a revolving stage. The death scene Helena (Genevieve O’Reilly), the multiple three levels created on the stage, and the ethereal lighting was breathtaking. In fact, it was the subsequent lack of levels and staging that somewhat disappointed in the second act. The military march through Babylon lacked resonance and Julian’s final death, after such great feats of staging, felt somewhat flat in this dessert between East and West.

There are a number of faults to be pointed out (Evian water bottle, confusing props, some fumbling with lines), but as the night I saw was a very early preview, I assume most of these will be smoothed. The contemporary screen projections with airplanes, the use of fluorescent colours on some of the costumes, and the camouflage on the soldiers all seemed at war with the epic tale being told. Somehow the details did not quite align in harmony. But so great was the tale, so impressive Scott’s performance that all minor criticisms seem of little import in the face of such a monumental production.

This entry was posted on June 21, 2011 by verbalparoxysm. It was filed under Theatre and was tagged with andrew scott, Ben Power, culture, emperor and galilean, Ghosts, Ibsen, national theatre, Olivier, Peer Gynt, stage, summer, theatre.