Moonlight review at the Donmar Warehouse 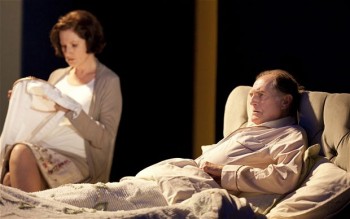 I feel rather fortuitous, given that I stumbled upon an advert for Harold Pinter’s Moonlight at the Donmar a full two months before the performance was to commence. With that knowledge in mind, I swiftly snapped up a pair of tickets with the only drawback being that I had to suspend my anticipation for what seemed like aeons before I had the opportunity to see it on stage- woe is me!

The performance did not let me down as I was compelled, emotionally roused and drawn to constantly search for my own interpretation within Pinter’s typically tacit and nuanced play. The intimate Donmar was the ideal venue for this tragic tale of the embittered Andy, lying on his death bed with his long-suffering wife, Bel, meditating on his past, speaking lucidly and with caustic reverie of his past indiscretions. The two other main characters are their sons, Jake and Fred, who live in a dingy bedsit, both bedraggled and offer no sympathy and very little mention of their dying father, choosing rather to indulge in intellectual wordplay- a clear indication that Andy was perhaps not exactly a model father. Andy and Bel’s deceased daughter also makes a couple of fleeting appearances, to bridge the gap between life and death.

The performances across the entire cast were excellent, with particular reference to David Bradley’s Andy. Bradley has the face of a man who has suffered, worn away by the pitfalls of life and rendered in to a scathing, scabrous malcontent. This play was a meditation of the final moments of death, when you have nowt to do but to think of the most significant memories that have defined you over the years, when all you can do is reminisce and try and celebrate what you have achieved. There is no celebration of life through Andy however as he questions why his sons have not visited him which is never explicitly answered, though through certain allusions to the past you can safely deduct that his rather bitter behaviour has contributed to his loneliness in death. Bel, played by Deborah Findlay, acting as the voice of calm and reason, is a brilliant counterpoint for Max; dry in her delivery but with an undercurrent of warmth that becomes clearer as the play reaches its climax.

It is not difficult to admire the genius of Pinter, his superior command of the language, lines of dialogue which are eloquent and forever poetic and this play showcased his talents in spades. The set was perfectly structured, with the two settings placed next to one another that allowed for swift interchanges between the two scenes; and, owing to the intimacy of the venue and the standard of performances across the cast, it at times felt as if this was not a work of fiction but a tragic slice of real life. 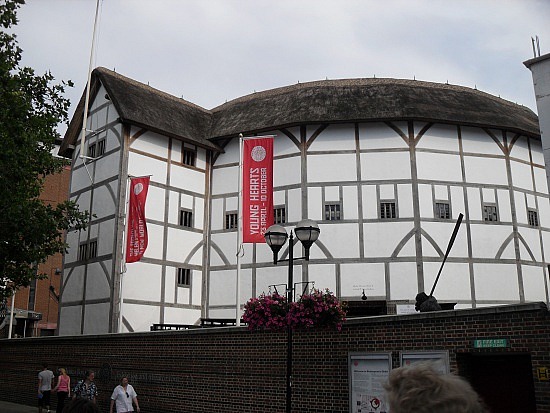 After searching through the labyrinth of the internet keenly looking for anything exciting pending in London’s theatreland I have discovered a few potentials that will definitely excite audiences and critics alike. Firstly, Pinter will be back in the West End at the Donmar. A production of Moonlight will be playing from 7th April to 28th May and unfortunately for those relative early birds, it has already sold out but the wonderful people at the Donmar provide a small allocation of day seats at a sensible price provided you pick them up in person. Now, I know this may mean going to work a little late or perhaps even, dare I say, skiving, but those pertinacious enough will, I am sure, be duly rewarded.

Theatre company LOVE&MADNESS  are putting on a short run of Dario Fo’s excellent farce, Accidental Death of an Anarchist at the Waterloo East theatre. Now, if you are like me, you would remember that the Donmar did a run of it many moons ago with Rhys Ifans in the lead role as Maniac and again, if you are like me, you would have been aggrieved at missing out on that particular performance- this is the chance to catch this hilarious play but ensure to get tickets early. It runs from 5-10 April.

Also, I’m very excited about the upcoming Globe season, which includes a celebration of 400 years of the King James Bible where actors, over a weekend, will read the entire Bible. I am very curious as to see how they decide to stage this and transform a verbatim reading into a theatrical experience. Christopher Marlowe’s, seemingly ubiquitous Dr Faustus will also be playing at the Globe in the summer. Exciting times indeed.

The Tories can’t keep theatre down!