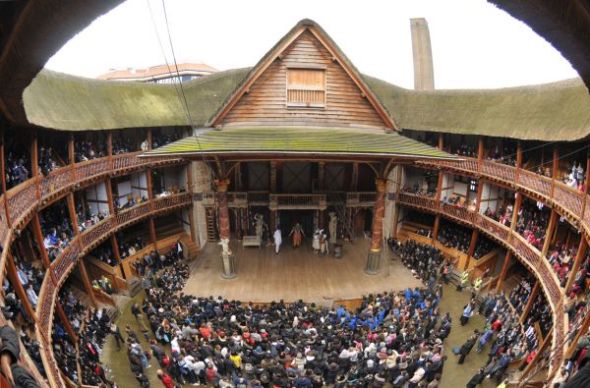 The prospect of this performance that in total was to take 69 hours, the Globe’s recitation of the King Jame’s Bible on its 400th anniversary, had me excited months in advance. I attended the performance of Act 2 to Corinthians. The sun was shining, the birds a twitter, and so I planted my bum onto the wooden seat, cushion free. If the apostles did not need cushions, then neither did I!

I had arrived with the great hope of learning more about this great piece of literature. An actor emerged, I was at first mesmerized by the fact that he had successfully memorized what seemed to be ten minutes of biblical text, then I noticed his ear piece. Still I was puzzled. However the next actress out revealed all. Her ear piece was so loud that I could clearly hear the woman’s voice reciting the text to her before she said it aloud. And so it went. Four actors taking turns in the recitation of this infamous text; an older man and woman, a younger set of the same mixed gender. The recitation was good and clear, yet because of the monotony of it, mistakes or stumbles were quickly noted. Something which I would rather be so entranced in the performance that I would not even notice.

Alas, despite my good intentions, the recitation was somewhat numbing. It was too easy to be distracted and my ears only picked up certain words like “burning bush” and “eunuch” before once again loosing the train of speech.

I only stayed for one hour when I had originally hoped to make it to four. Still I think it is an excellent undertaking, particularly for those zealous followers who brought their bibles with which to follow along.