Tosca returns to Madrid’s Teatro Real to conclude the theatre’s season in the form of director Nuria Espert’s 2004 production.

Tosca is one of Puccini’s three grand masterpieces along Madame Butterfly and La Boheme. Puccini’s crowd-pleasing operas have been labeled as too conventional by some, however I find the tonal orchestration and soaring melodies to be emotive and expressively beautiful.

The story of Tosca revolves around the performer’s desperate love for a revolutionary artist.  The opera begins within the setting of the church Santa Maria della Valle where her lover, Cavaradossi, is painting a portrait. Tosca is jealous of the woman painted in her lover’s portrait. Unlike this year’s ROH production in London, this set is open and soaring. There is a large cast wandering in and out of the cathedral throughout the first act. Candles are slowly lit; nuns pass through on their way to prayer, laymen on their way to confession. It is a very effective scene before us, which is set. The beautiful chorus in Act I is vibrant and makes the air buzz with devotional harmony.

Act II presents Baritone Lado Ataneli’s Scarpia as a bishop rather than a police chief. He performs well using all the delicate cunning and deceitful power that this villain requires. Tosca’s conclusion of the murder by splashing wine an image of Christ on the crucifix was potent and appropriate. Soprano Violeta Urmana convincingly conveys her dismay and disenchantment with the religion that before that harrowing moment had been her lifelong companion and guide. She plays a strong woman who one could easily believe would attack before being attacked. The entire scene is extremely well staged and makes good use of the vast space that is Scarpia’s private room.

Cavaradossi’s “mock” execution by firing squad is brilliantly set against a stone wall, almost as if his blood were to become the paint of a work of art. Marco Berti brings life to this somewhat one-dimensional character and it takes a great personality to stand up on stage next to such a bold Soprano as Urmana. As the prisoners march in at the opening, children attempt to give the men water. A touching moment before the heart rendering execution and suicide.

I was surprised to hear booing among the audience during the final applause. But this is evidence of a much more open and conversive critique of the opera that occurs in Italy and Spain. Just imagine an American audience, rather than jumping to their feet tat the first sign of a falling curtain, instead remaining seated and vocally criticizing. Never!

Having attended both Messiaen’s St Francis of Assisi and Puccini’s Tosca in one week provided a well-rounded viewpoint of Mortier’s vast capabilities with this opera company. He has amply demonstrated that Teatro Real can both astound with a fresh contemporary piece as well as hit the mark with the crowd-pleasing classics. 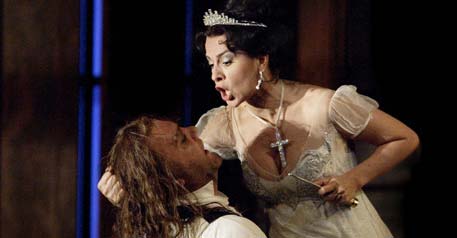 Tosca is one of Puccini’s great masterpieces and the Royal Opera House’s revival of Jonathan Kent’s 2006 production brings the drama to glorious life.

The setting is the eve of the Battle of Marengo as Napoleon’s army caused disarray throughout the city states of Italy. It is a moving tale of love, personal freedom, ideals, betrayal, and redemption. Tosca (Martina Serafin), Rome’s most beautiful opera singer is in love with a painter, Cavaradossi (Marcello Giordani).  Act I, placed in a cramped, split-level chapel with the altar above and the crypt below feels too small for this much drama. However, despite the limited space, the soprano and tenor movingly portray the tensions and placations of two young lovers. But yet, the waters are not calm as political betrayal is underfoot in the form of a dissident escaping from prison and begging Cavaradossi to aid hm in his escape.

Enter the villain. What a vile, putrid individual is the Baron Scarpia (Finnish baritone Juha Uusitalo making his Covent Garden debut). He even purports to prefer to have his women on the run from him rather than swooning in romance for him. It is the fear and hatred that wets his lustful appetite. Charming. Uusitalo was so effectively repugnant in his portrayal of this loathing man that he makes the viewer’s skin crawl.  While chasing down the escaped political prisoner, he arrests Cavaradossi in the two-fold aim of finding the prisoner and sating his lust for Tosca. To save her lover, Tosca must make the ultimate sacrifice to the hated Baron Scarpia.  Serafin’s portrayal of this woman’s inner turmoil was elegant and emotive, her warm voice growing as the anguish in heart at the thought of being betrayed by her beloved god crescendos.

Despite the current cast being a warm up for the power cast to come, their performances were moving. The vocal performances where unusually matched in theatrical capability by this production’s stars. Serafin’s shining star of Tosca evoked great passion, sympathy, and admiration. She gave an accomplished performance. The only critique was that at times she felt encumbered by her overly elaborate costumes. Giordani’s Cavaradossi was a well-rounded, traditionally Italian tenor. Uusitalo’s Scarpia while menacing and imposing in stature, did eventually feel a bit repetitive and caged in by his staging.

Antonio Pappano’s conducting draws Puccini’s precision and passion from this talented orchestra. The elaborate, gothic set designs of Paul Brown are as powerful and dramatic as the plot. The monumental statue, moody settings, and in particular leaving Scarpia’s study nearly bookless were all well-chosen for dramatic effect. I left the production pondering what we are expected to give sacrifice love and how hope, in the face of great adversity, can make believers of us all.